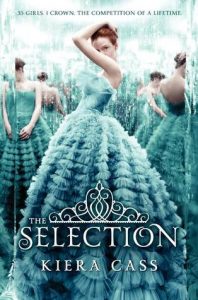 The Selection by Kiera Cass

The book is set in a dystopian world where young America, along with other young teens are taken to the castle to win over Maxon’s heart. This is Kiera’s first book in The Selection series, out of five (so far). Kiera Cass (born May 1981) is an American writer of young-adult fiction, most known for The Selection and its sequels. Kiera Cass is also the author of The Siren, another love story.
The Selection is set in a dystopian society with caste levels and rankings, it is a fantasy, young adult romantic, fiction novel evolving around America’s journey trying to win Maxon’s heart

The novel starts by introducing America, her family and her secret love life, kept secret from her family. Thirty-five girls are given the opportunity to travel and live in the palace and compete for Prince Maxon’s heart, and become a princess.
America is not overjoyed when her parents force her into completing for the throne, not more so when she gets chosen as one of the thirty-five, lucky to get this opportunity. America finds it extremely hard to leave her love and is dreading having to live at a palace that gets invaded by rebels.
Once America meets Prince Maxon, she begins to question her doubts and realises that this life may be for her, after all.
“America Singer, one day you will fall asleep in my arms every night. And you’ll wake up to my kisses every morning.”
― Kiera Cass, The Selection
The writing style is wonderful in engaging the audience through the novel, waiting for more. I was pleasantly surprised by America’s personality, I was able to watch her grow as a character through the novel, and note how she matures and really becomes a princess. The writing style also matches the overall theme of the novel and the set audience (around 13+).
I would recommend this book to anyone who enjoys a typical romance novel, similar to the hunger games, in which people are competing for a title, however a few scenes are a bit mature, which suggests this book is most suitable for anyone above 13.

Please leave your own reviews and comments below, we can start a discussion!